Bottled Water vs Filtered Water: Which is Better? 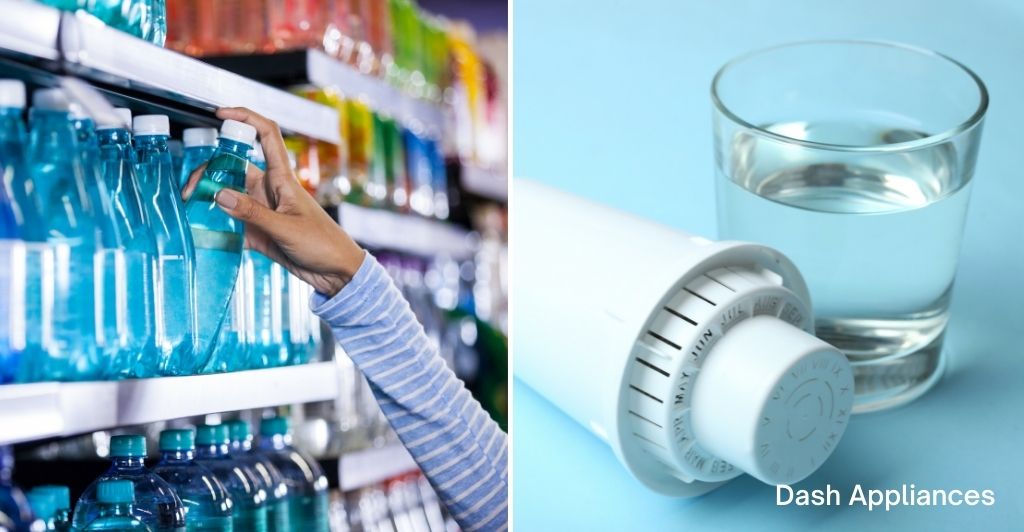 There has been an increase in the concern for the environment among people these days. In most cases, it is the increased use of plastic bottles. As a result, people are now questioning whether to go for tap water or bottled water.

A lot of people are concerned about which of the two might be a safe option or which one tastes better. However, there is also a range of factors that needs to be taken into account while trying to which is a better option.

This post will primarily deal with the comparison between bottled water vs filtered water, and finally arrive at a conclusion regarding which is one is best.

What is Bottled Water?

Bottled water is the drinking water in plastic bottles and other containers.

It is packaged water, the size of which could vary from small 1-liter bottles to gallons of water in huge containers. The water in these bottles is safe for our consumption.

What is Filtered Water?

Filtered water is the purified water that goes through the filter for purification before it is used for consumption.

It eliminates the impurities and all types of contaminants from the water, making it perfectly fit and healthy for human consumption.

The FDA (Food and Drug Administration) determines the bottled or packaged water standard. It means that manufacturers must process water and then transport it after packaging under sanitary conditions.

Filtered water, on the other hand, is the safest.

Here are a few other differences between filtered and bottled water. Let’s check them out.

The main factors to consider while choosing between bottled and filtered / tap water are the safety level of the water, the flavor, cost, availability, and the impact on nature.

According to CDC (Centre For Disease Control and Prevention), drinking water supplied in the United States happens to be among the safest in the world. However, as per Food and Water Watch, a non-profit organization, tap water in the United States should undergo more frequent testing than bottled water.

The EPA (Environment Protection Agency) has been given the responsibility to identify and accordingly set the limit for determining the level of contaminants found in tap water and underground water. These may include micro-organisms and chemicals.

The Safe Drinking Water Act outlines the standard. In the event of any concern related to the safety of tap water, federal law takes over. In that case, the various water companies should inform the public about everything.

Although the EPA is responsible for determining the tap water standard, not all components present in water are subject to rules according to EWG (Environmental Working Groups). The EWG has further reported that the limit of the contaminant level has remained unaltered for the last two decades.

It is recommended that people check the quality of tap water by contacting the local water company, procuring a Water Quality Report, and cross-checking it against the EWG guidelines or both.

To further improve the current tap water standard, individuals can consider filtering using carbon filters or reverse osmosis, which is even more effective.

Several blind tests have consistently revealed that most people cannot distinguish between bottled and tap water.

A study conducted in 2010, published in the Journal of Sensory Studies, reveals that most of the participants could not distinguish between six different packaged mineral water and six municipal tap water after the tap water was made chlorine-free.

In most cases, people preferred mineral water with medium mineralization, irrespective of the source. However, only about 35 per cent of the participants could distinguish between packaged and tap water.

Although tap water may not taste as good as bottled water on many occasions, it does not mean that the quality of water is poor. It may be due to chlorination or the fact that there might be a high mineral content. One of the options to improve the taste of tap water is using a filter. The other option is the addition of ice and lemon slice.

There is no doubt that filtered / tap water is far more inexpensive and convenient. You simply need to turn on a faucet and get cool and safe water for drinking.

Also, tap water is readily available at various points like a restaurant or public drinking water fountains for free of cost.

To prevent any kind of contamination, various water companies worldwide treat public drinking water with chemicals and various other processes. After that, the water is pumped to holding tanks.

Also, after drinking water, the possibility is that the person will wash the glass either with hands or using a dishwasher. These steps involve the use of chemicals and other forms of energy that impact nature.

According to a report published by the Massachusetts Water Resources, the impact on nature by drinking tap / filtered water is far less as compared to bottled water. After all, it cannot be denied that there would be no need for any disposable packaging that later on may end up at a recycling center or landfill.

Benefits and Cons Of Bottled Water

Here are the pros an cons of bottled water…

There is rarely any contamination leading to the recall of bottled water. However, research reveals that bottled water contains micro-plastics that are harmful to the human body and may lead to health risks later on.

A study conducted in 2018, involving the examination of 11 different international brands of bottled water from nine nations, found that almost 90 percent of the bottles revealed microplastic contamination symptoms. Also, the amount was almost double than what was present in tap water.

Such findings are a clear indication that water contamination is due to the packaging process. Therefore, researchers are now trying to investigate the effect of these microplastics on human health.

Microplastics belong to the same class of chemicals that disrupts the endocrine like obesogen. As a result, it affects biological processes like reproduction, metabolism, oxidation, and several other human and animal processes.

Just like individuals with a  weak immune system are supposed to take special care even while drinking water, it is important for all individuals to ensure that the chosen bottled water is adequately protected.

The inspection by the FDA of bottled water units is rare. It has recalled just two brands till date, in 2001 and 2005 respectively, because of contamination.

It has been found that the average consumer has limited access to information especially related to packaged water contaminant levels than tap water.

Some people are fond of bottled water taste. However, as mentioned above, studies indicate that the majority of the users are unable to differentiate between bottled and tap water.

At the time of buying bottled water, people are more inclined towards considering the source. However, they do not know that most bottled water is plain simple tap water.

Water coming from a fresh spring or underground is supposed to have any of the FDA approved labels:

However, one of the reasons why people choose bottled water over tap water, irrespective of the higher cost, is convenience. It is way easier to have a bottle in hand, especially when outside or if there is no nearby faucet.

Several kinds of research have indicated that refrigeration, bottling, and transportation processes related to water and disposal of the plastic bottles post-use lead to an adverse environmental effect, which is way more than tap water.

An excellent example of this would be the bottling in The United States in 2016. The energy input was estimated to be close to almost 64 million oil barrels. According to Container Recycling Institute, a non-profit organization, 60 million plastic water bottles are disposed of daily in the United States.

A major portion of these bottles end up in the waterways and landfills or are simply littered on the street. Most alarming is that these plastic bottles release harmful toxins as they break down.

Although initiatives are underway to re-use these bottles to lower the environmental impact, long-term risks exist. Additionally, there is also a risk of bacterial growth along with the risk of toxins seeping out from the bottles.

Bottled Water vs Filtered Water: Which one is Best?

On an overall basis, it can be said that filtered water is much better no matter what the case. It is not only convenient but is inexpensive as well. In fact, it might be available for free in a few scenarios. Most importantly, the environmental impact is way less than what is extended by bottled water.

Filtered water is equally safe as bottled water. Though there is enough evidence that bottled water may not be as pure as many perceive it, most will not be able to spot any difference at all in case of a blind trial.

Some individuals need to take extra precautions with water, like immune system issues or pregnant or senior citizens. In such cases, boiling tap water ad then filtering it is more than enough.